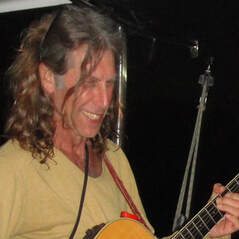 Tarshito is a seasoned musician, having played guitar since 1961. Born and brought up in South Africa on rock, jazz, funk, and classical, he's traveled extensively and played with awesome musicians from around the globe, assimilating world music styles into his music including African, Latin, Brazilian, Eastern, Mid- Eastern, Indonesian, Australian tribal, Ambient, New Age, Trance and Sacred Chanting.

Studying , composing and singing since picking up the guitar for the first time, he  also plays bass, keyboards, flute, percussion and didgeridoo.

Recording, arranging and producing music since 1983.

He moved to Australia in 1984 and built his own recording studio in 1988 and to date has released 59 albums of his own and recorded and produced many albums for other musicians winning many awards for his music .

He has been involved in Yoga, Meditation and Healing since 1969 and has played/worked in theatre, multi-media presentations, rituals, ceremonies and celebrations.. This has had a major influence on his music along with a love of nature and environment.

He has been singing bhajans, kirtans and sacred chants since 1970 and has released many meditation, chakra and other healing music albums.